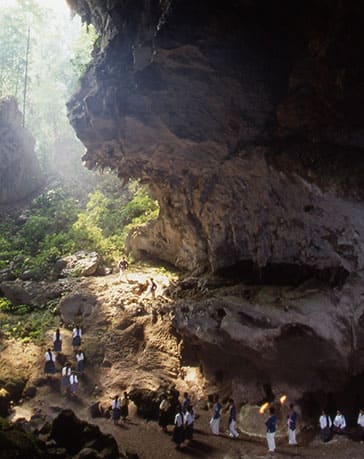 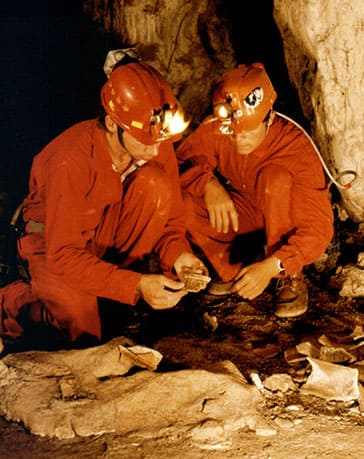 The caves and the symbol
in guatemala

The water, which fell drop by drop from the stalactites that was collected in large jugs placed for the purpose, were used for the cult of virgin water, called “Zuhuy ha”, indispensable for the purification rites very pronounced in the Mayan religion.

Spear points or obsidian blades, which we still find in the caves, could be used at the time of the rituals accompanying this cult of “Zuhuy ha”.

Large quantities of tenants and the rare whole vases tend to prove that the practice of ritually breaking ceramics at the time of their ceremonies is mainly related to the agricultural cycle, to request abundant harvests.

because it is from inside the earth that the first men are born. The divinities of rain and water, linked to the renewal and the jungle, live in the caves.

because the caves are naturally linked to the underground world, domain of death.

The Jaguar, divinized represents the Sun during its night trip inside the earth, from West to East. He is also associated with the world of night:

USE OF CANDELARIA CAVES BY LOS MAYAS

The underground galleries of the network are made up of three levels: the current level of the river, the active network, which we can travel with light boats or rim tubes: the tubing and two “fossil” levels located 10 to 15 meters above. The Mayas used these “fossil” galleries and rooms to install various places of worship.

The Candelaria Caves were mainly used as places of worship and pilgrimages. Numerous stone walls seem to have been conceived to accentuate the “seclusion” environment of these underground places and thus give them a sacred character.

The occupation of these caves dates back to the middle preclassic period (600 BC) and continued until the end of the recent classical period (900 BC).

We noticed a restart of the activities at the end of the recent classical period (800-900 after Christ).

After 900, all activity in the caves of Candelaria ceases.

“Hunahpu and Xbalanque”, the heroic twins of the Mayan bible of Popol Vuh, followed the slopes that led them to Tecolotlan, the Land of Owls, until they reached the sacred river that runs between faults, canyons and caves, traveled every night by Ah Kinchil, the Solar God transformed into “Jaguar.” (Popol Wuj)

The xib’alb’a of the popol Wuj is a mythical place linked to the “transversal strip”, Karstica region with numerous Caves, among them the “Bombil Pec” and “Candelaria” Caves.

Inside the Candelaria Caves, there is a river that runs through seven large rooms, with ceilings over 30 meters high, lit by the number of entrances and siguanes.

Thousands of vessels carpet the floor of the rooms. Numerous silver-forms, altars and some offering remains show that the Caves of Candelaria were an important pilgrimage site.

CANDELARIA: THE BIRTH OF A NEW SUN ...

The sun, Jaguar of the Underworld, is related to the number seven, which corresponds to the interior of the earth. In the Popol Wuj, the twin heroes are housed each night in one of the seven great rooms of a cave, which seem to refer to the seven main rooms of the Candelaria Caves. The new creation of the cosmos and the birth of a new sun began in Xibalba, since it was on the banks of the sacred river where the twins, after voluntarily dying, woke up again to start their way to the sky, transformed into the sun and the Moon.